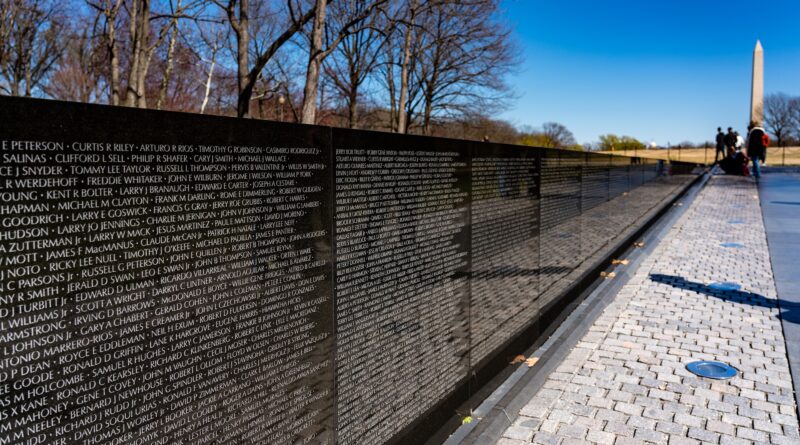 Some years ago my wife, Ellen, and I were members of a local travel club. The Fifty Plus Club was primarily a bus trip operation. One trip took us to Alexandria, Virginia and the District of Columbia. Although not on the original itinerary, the bus stopped at the newly installed Vietnam War memorial wall on the way home.

I got out of the bus and looked at the black marble wall that was depressed into the surface of the Washington Mall. My initial reaction was confusion. I looked at the memorial and wondered what the press acclaim was all about. This was nothing but a trench in the ground, with a black marble wall on the side of the walkway.Ellen and I started to walk down the incline. My attention was drawn to the engraved names on the wall. They are the names of the 54,000 service men and women who lost their lives in that war. As we continued down the path the names increased and my emotion and remorse amplified. As the path leveled we were greeted by memorabilia along the wall that family members of the lost had left behind.

We continued up the path to the opposite side of the wall. The names on the wall grew thinner as we approached the top. Just as the casualties declined in the waning days of 1973. At this point I was so overwhelmed with emotion that I could not speak, and was fighting off the tears. I remembered the long missions I flew to support the troops fighting in Vietnam; the plane load of caskets in my C-141 at Da Nang; the limbless young men that I saw at Bethesda Naval Hospital; the treasonous self promoting behavior of the despicable John Kerry;  the actions of Jane Fonda and other Hollywood leftists; the cursing and spitting at returning servicemen at airports.; the fanatical scowl of the woman in the New You City subway while her kindergarten age son hurled curses at me as I rode the train in uniform.  …  Alas, I stood there at the top of the path, totally immobilized.

Now I had a problem! The bus was on the other side of the wall. And the only way to reach it was to retrace our steps down into the wall and then up the path to the other side. As I descended the path my composure returned and my sadness and grief was replaced by growing irrepressible anger. I thought of the politicians who mismanaged this debacle. Their failure to allow the military to act aggressively, win and leave! I remembered the newspapers and television newscasters who blamed the serviceman for the war, and not the politicians who ordered them to fight in this remote land. Then I recalled the liberal clergymen who also placed blame on the men and women in uniform. I recalled the grief and pride of a family when I was assigned to present posthumous medals for an Air Force aviator killed in Vietnam.  I got angrier and angrier with each step. By the time I reached the top of the incline I was furious and red faced, ready to take on Robert MacNamara, Lyndon Johnson and the leftist anarchist fifth column.

I climbed on the bus and remained silent during the three hour ride home. I have been back to the wall on several occasions; the impact is always the same…just a variation of my original experience.