The Boeing Stratocruiser was used by Pan American Airways from 1948 until the early 1960’s. The military version was designated the KC-97 and was operated at a higher gross weight. This required a modification of the brake system. This modification, albeit highly effective in stopping a heavy aircraft, created strange wailing sounds when the brakes were applied.

It was about three O’clock in the morning when we landed at Pease AFB in New Hampshire after completing an air refueling mission for the Strategic Air Command (SAC). After we taxied off the runway, the Wing Command Post advised that our KC-97 aircraft was due for a periodic maintenance inspection. We were told not to return the airplane to the normal tanker parking ramp, but taxi to the north end of the field and park it on the maintenance ramp.

Major Tom McCabe, the Aircraft Commander, was easing the large airplane forward at a crawl. The marshaller in front of the aircraft waved his dual lighted batons in a measured rhythm as each wing walker swung a single baton slowly to indicate safe clearance on the sides of the creeping mammoth. The brakes wailed in the thickening mist. We could not see our wingtips from the cockpit.

Suddenly, the wing walker on the right side started to wave two lighted wands. He jerked them rapidly over his shoulders. This was adverse to any procedure in the manual. What was going on? Then the marshaller frantically signaled an emergency stop; there was an inaudible crunch as our right wing tip tore through the radar nose cone of a B-47 sitting invisibly on the ramp. Our aircraft rocked as Major McCabe stomped on the brakes. (All 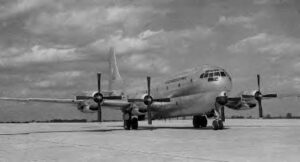 I ripped open the cockpit door, lifted the floor hatch and hustled down the ladder to crank open the front entrance door as the flight engineer shut down the engines. I emerged into a light drizzle and ran over to the wing walker with Major McCabe at my heels. As we reached the terrified teenage airman he stammered: “I tried to warn you sir, you were going to hit it by it by this much!” … as he held his hands above his shoulders to demonstrate the distance involved, and the sincerity of his warning.

The rain intensified, Major McCabe moaned and quietly walked away as I stifled a laugh.

Major Tom McCabe was a combat veteran of strategic bombing operations in Europe during World War II. He was an Eighth Air Force buddy of the Colonel who was the Wing Director of Maintenance. The Colonel quietly repaired the B-47 nose cone when a “routine maintenance inspection” in the morning discovered that there was a “small crack” in the bomber’s radar dome that required a replacement. There was no damage to our aircraft’s wingtip. Consequently, the wrath of the Strategic Air Command was averted.