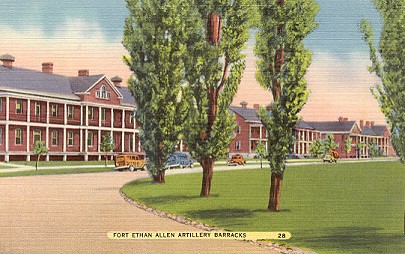 I attended Air Force ROTC Summer Camp at Ethan Allen Air Force Base near Burlington, Vermont during the summer of 1956.

AFROTC Summer Camp Cadet training was designed to develop the student’s leadership ability. It was an intense academic and physical training program interspersed with mild hazing to test officer candidates under simulated stressful situations. We were kept busy from early morning until late at night. Some exercises were designed to see how we could work as a group, others sought to assess how we would perform in leadership situations.

Working together as a group was measured in diverse activities … such as reporting for formations in the early morning, cleaning the barracks, and many other demands. It was a contest to see how we reacted to challenges from the Tactical Officers who watched us very carefully.

E than Allen AFB was originally built for the U.S. Army as Fort Ethan Allen in the 1890’s.We lived in an old two story brick building with a large wooden covered porch across the front. There was a big center hall with a wide stairway going up to the second floor. Large rooms were on either side of the hallway. I was in a barracks room on the second floor with about 40 other cadets. We had double deck steel beds with a mattress set on a steel wire frame that had small coil springs around the perimeter. Anyone who has served in the military is familiar with this arrangement.

Every morning we were called out for a military formation, sometimes with little to no notice. Everyone would jump out of bed, dress quickly, and form into ranks in front of the building. The TAC officers would time us … and then take a head count when time ran out. If someone was late, or didn’t show up, the entire flight received demerits. Demerits meant hours of walking “tours” with an M-1 rifle on your shoulder. These “tours” came out of the very limited time we had for ourselves. There was one cadet in our flight who was consistently late. He slept like a dead man. We could not get him up in the morning. We all walked “tours” because of his tardiness.

After unsuccessfully talking to him, and having had enough of his sleepiness, we decided that we had to do something about it. We agreed on a corrective action and decided to get up very early the next morning to implement the plan.

I got the strongest and tallest of my fellow cadets to help. “Sleeping Beauty” slept in an upper bunk. We each grabbed a leg of his bed that was nested on top of the bed frame beneath him. Carefully lifting his bed off the supports that secured it to the bunk below, we carried him, sleeping peacefully, out of the room. Slowly and methodically we proceeded to move him to the center stairwell. Keeping his bed level, we descended the stairs and went out through the front door. We moved across the wooden porch, down the front steps and out to the road in front of the building. This road led from the main gate, along the central parade grounds in front of the row of old brick buildings, and up to Wing Headquarters at the end of the street. We placed the bed lengthwise on the white line in the middle of the street where the cadets would soon be assembling. He was sound asleep! This morning he was not going to be late … he was definitely going to be there on time … assuredly, he was going to be the first cadet to arrive! We then retreated quietly into our barracks. 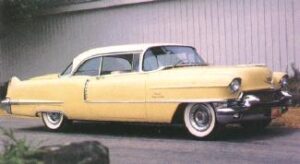 When the sleepy cadet awoke, he was looking into the eyes of the Base Commander. The Colonel was amazed to find a bed in the middle of the street as he drove his new Cadillac to a pre dawn meeting. We watched with glee from the upstairs windows as the once lethargic cadet tried to explain to the Colonel what he was doing there!

Needless to say, we did not have trouble with him making future formations on time.