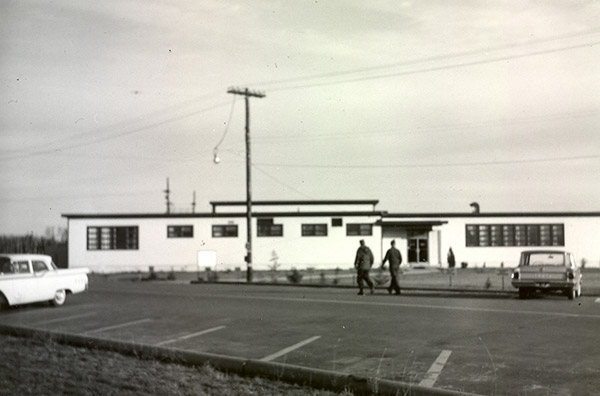 It was January 1961 and I was in the Visiting Officers Quarters (VOQ) at Goose Bay, Labrador. My crew would go into alert the next morning. For the next two weeks we would live in the Strategic Air Command Alert Facility, affectionately called “The Mole Hole”. We would be ready, round the clock, to launch our KC-97 air refueler if the nation was attacked.

My copilot, John Lennox, and I prepared to go across the street to the officers club for dinner. At that time everyone was required to wear a suit or class “A” uniform when in the club. As we were leaving the room we debated whether we should wear our parkas. The sun was setting, there was snow on the ground, the sky was clear and the temperature was near zero as plumes of steam rose vertically from buildings in the calm air. Good sense whispered: “Wear your parka.” Our Lieutenant’s optimism shouted: “It’s only across the street – less than 300 feet – door to door. Why be troubled trying to find your parka in the mass of identical parkas in the cloakroom?” We looked out the window again… DECISION!! … It’s a short distance, let’s run across the street and not be bothered with the parka hassle!

As we hustled down the path from the VOQ the snow under foot squeaked a warning that it was very cold and we should not be outside without an overcoat. I started to run and John was a few steps behind me as we raced toward the shoveled passageway leading to the Officers Club’s front door.

As I reached the center of the street, the base loudspeakers came to life. TAA ..TAA.. TAA.. DAAHHHH!!!!! Oh my word! It was retreat! They were going to haul down the flag. The bugle echoed through the arctic air as I put my head down and increased my cadence and raced for the warmth inside the O’Club door.

I was about 50 feet from the building when I noticed a huge man standing in the doorway. He was big like THE HULK, had the bearing of John Wayne and looked like Ernest Borgnine. He glared at me as I approached. The gleaming silver eagle affixed to the front of his fur hat defied me to ignore the military tradition that required all military personnel to stop, face the flag– or the direction of the music- and then stand at attention and render the right hand salute as the national anthem was played during the lowering of the flag.

I halted abruptly and John slid to a stop next to me. We turned, saluted, and literally “Faced the Music!” We stood in the frigid twilight as the Star Spangled Banner resounded in the crisp winter air …. My blue uniform was not providing any protection. The national anthem came to an end as I started to shake… relief … but no … the music continued … It was “The Maple Leaf.”… The melody proudly proclaimed: “This is Canada!” …. OH NO!!! …The loudspeakers then filled the darkening air with “God Save the Queen!” It played slowly … and majestically … to announce that Canada was a Dominion of the British Empire. Mercifully, the music finally stopped as my shivering escalated to throbbing. As I brought my right arm down from the salute, the liquid in my elbow cracked loudly and pain shot down my arm. Turning quickly, I resumed the run into the club.

As I passed the massive Colonel in the entryway, He growled:

“Next time, Sonny, wear your Parka!”