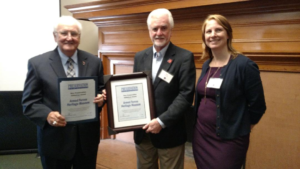 The New Jersey Military Mobile Museum project was born out of the AFHM mission to “Preserve, Honor, and Educate all on the history of the military in New Jersey and the surrounding areas.” The original aim was to build a fixed museum on the Joint Base McGuire-Dix-Lakehurst that would facilitate public access currently not available due to Base security access restrictions. This fixed museum approach encountered difficulties in obtaining the necessary regulation considerations for its development. Consequently, Armed Forces Heritage Museum decided to pursue a mobile museum approach in bringing New Jersey’s military history to the public.

Through the donation of a mobile stage trailer that was being replaced by Ewing Township leadership, the AFHM was able to refurbish and retrofit the unit into a set of displays within its 32-foot-long exhibit area. The exhibit “stories” were developed by a dedicated team of AFHM members and brought to reality through the vision of Lynch Exhibitors in Burlington, New Jersey. The Armed Forces Heritage Museum also has online resources of archival materials, and a wonderful living history documentary series, some of which is incorporated into the mobile museum.

Since its launch in June 2017, the New Jersey Military Mobile Museum enjoyed a successful inaugural season with displays at nine events. Future plans include the design and development of a larger, 53-foot mobile unit that will house an array of interactive exhibits covering at least the past 200 years of New Jersey military history that will travel state-wide.