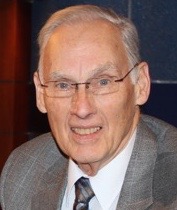 Bob joined the Coast Guard Reserve while in High School and was assigned to Port Security duties. He transferred to the Air Force Reserve while attending Queens College of the City of New York. He was commissioned from the AFROTC program and served over 35 years of active and reserve duty. He accumulated over 5,000 career flying hours in Air Refueling activities in the Strategic Air Command; and tactical and strategic airlift operations in the Air Force Reserve Command, where he was an Air Reserve Technician.

Bob served in command and staff positions in the 514th Military Airlift Wing. He was a staff officer serving in Homeland Defense where he planned military support actions to the civilian community in the event of an attack on the nation, civil disobedience or natural disasters.

He is a past president of the McGuire Chapter of the Reserve Offices Association and a long-time director of the McGuire Foundation. He was among the cadre of McGuire Foundation members who planned and built Starlifter Memorial Park at Joint Base McGuire-Dix-Lakehurst that features a Lockheed C-141 aircraft as its focal point. Bob has been a Director at the Air Victory Museum and is a member of the Burlington County Historians Roundtable. He represents the museum at the Small Museum Association.

Bob has been an effective advocate for the mentally ill for the past 30 years. He was a member of the Board of Directors at the Drenk Behavioral Health Center and is a past President of the Burlington County affiliate of the National Alliance on Mental Illness (NAMI). For the past fifteen years he served on a group that develops the New Jersey Family Support Plan. He was a charter member of a Burlington County committee that initiated police training to resolve mental illness factors peacefully during law enforcement situations.

In the business world, he held sales management and product marketing positions before becoming Director of Training at FMC Corporation -a Fortune 100 company.