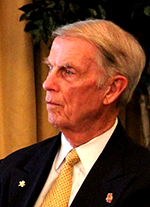 A son of Swedish immigrants, Dick Isackson graduated from the University of Buffalo with a degree in History and Government. Commissioned in the Air Force through AFROTC, he completed navigator training at Ellington AFB, TX. Assigned McGuire AFB, NJ flying C-118’s, he amassed more than 6,000 hours of flight time before transferring to the Air National Guard at Willow Grove, PA where he served as a Flight Examiner/Instructor flying the C-97 aircraft. In this capacity he participated in the Viet Nam airlift, as well as other worldwide airlift operations. Subsequently, he was assigned as Deputy Commander of a 9-state liaison region for the Civil Air Patrol, and later as a project information officer with the 9010 ARIS. Dick retired in 1984.

A longtime member of the Willingboro Rotary; he has served as Club President and District Governor. For over two decades, he has facilitated the shipment of a large container filled with food, clothing, and equipment needed by an Orphanage in Santo Domingo, Dominican Republic. Dick has led Group Study Exchange Teams to Japan, India and Australia. He generated matching grant projects in Ukraine, Peru and Dominican Republic as well as leading a Friendship Exchange to South Africa. He is the recipient of Rotary’s Highest Award – “Service above Self” – only 150 annually are awarded out of 1.2 million Rotarians worldwide.

Dick is the President of The Major Thomas B. McGuire, Jr. Memorial Foundation and was a member of the cadre who constructed Starlifter Park at the Joint Base. Additionally, the foundation provides awards and scholarships in support of the Joint Base. Currently he is on the Board of the Orchid Foundation and is Director Emeritus of the Burlington County Chamber of Commerce.

Dick serves as Chairman of the AFHM 911 Memorial Committee.