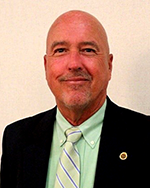 Al Kernagis retired from the New Jersey State Police after serving the people of State of New Jersey for 33 years. Starting his career as a general road trooper, he retired as the Deputy Superintendent with rank of Lieutenant Colonel. AL was involved with numerous security details from Presidential visits, World Cup protection and National Governor’s Conferences. Additionally, he was responsible for providing personal security for the Governor of the State of New Jersey and the Attorney General.

Al was one of the first responders to New York City on 9-11. In this capacity he led the personnel of the New Jersey State Police participation in the rescue and recovery operations immediately after the attack on the World Trade Center.

Upon retirement he became a police management consultant working with the Richard Stockton College Police Department and was an assessor for police standards for the New Jersey State Police Chief’s Association.

Al is a past president of the Major Thomas B. McGuire Memorial Foundation. In this capacity he was a founder of the Armed Forces Heritage House Museum; having appointed the charter officers of the organization. During his tenure with the McGuire Foundation he was instrumental in the construction of Starlifter Memorial Park and other projects in support of McGuire Air Force Base. Al has coordinated the annual Memorial Day Parade of Wreaths ceremony at the Joint Base in recent years.

Al is a member of the Burlington County Military Affairs Committee. He is the Honorary Commander of the 621st CRW at Joint Base MDL and is a life member of the Superior Officer’s Association of the New Jersey State Police.