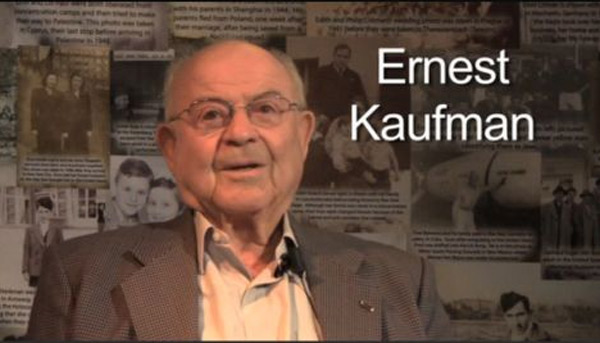 A true friend, hero and patriot.

May he rest in peace.

We are devastated by his loss.

Ernest Kaufman, a Holocaust survivor who spoke to groups for the JCRC’s Esther Raab Holocaust Museum and Goodwin Education Center until the onset of the COVID-19 pandemic earlier this year, passed away on Sept. 3 at the age of 100. He was a resident of Medford.

Ernest Kaufman was born in a small town in Western Germany, a town where his family had roots for over 300 years. He clearly remembered the Nazi party taking control in Germany in the 1930s. At first, the regulations and changes were gradual, and then his life changed. He was declared an outcast by his friends. He wasn’t allowed to attend his public school, and business declined at his father’s butcher shop.

In 1938, during Kristallnacht, he was put on a train along with hundreds of other Jewish men and sent to Buchenwald. After a month of overwhelming terror at Buchenwald, an American family signed an “Affidavit of Support,” allowing him to be released from the concentration camp and immigrate to the United States. He came to these shores and worked feverishly to earn enough money to bring his parents to the States. But after Pearl Harbor, any hope that he had of saving his parents seemed lost, so he joined the US Army, and fought in Germany against the Nazi regime.

Even though his fight took him back to the town where he had grown up, it wasn’t until after the war ended that he discovered that his parents had been deported and killed in Belzec.

In his talks for the Raab/Goodwin Center, he told his listeners that they have to take the responsibility of making sure that what happened during the Holocaust never happens again.

He was the husband of the late Mina (nee Menko). He is survived by daughter Renee Kaufman and son-in-law Arthur Cytryn.