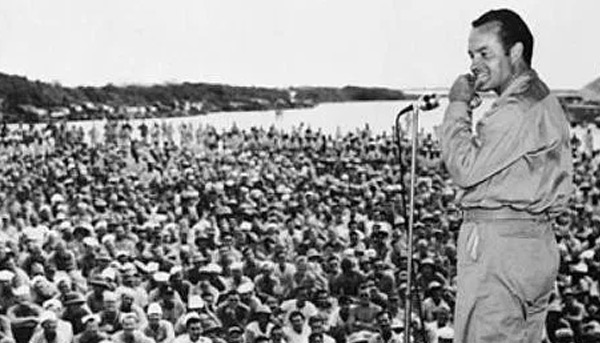 The alert schedule for the 509th Air Refueling Squadron was published and my crew was listed to spend Christmas on Reflex Alert duty at Goose Bay, Labrador. Needless to say, my wife and children were unhappy that I would not celebrate Christmas with them. But duty called, and I flew off the frozen north to spend the holidays defending the nation from nuclear attack. 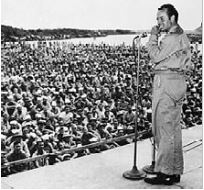 oose Bay for a show before moving on to Europe and the middle east.

This was one many USO tours that Bob Hope performed between 1941 and 1991. Each year he would assemble a group of entertainers and visit the troops who were serving overseas during the holidays. Performances would be filmed and excerpts entertained the folks at home, initially in a movie house or on radio, and later on television. Prominent stars populated his entourage. The cast usually included beautiful women, singers, dancers, and comedians who acted as foils for Hope. This year’s troupe included Anita Bryant and Jerry Colonna.

The show was performed in a large hangar. The floor of the hangar was filled with seats and airmen who could not find a seat were amassed in any available spot in the huge hangar. It seemed as if the entire base was on hold during the show … however, I am certain that the Strategic Air Command had a skeleton crew to manage the essentials of base operation.

Hope’s banter featured self deprecation, rapid delivery and inside jokes about the base and personnel assigned there. I was impressed on how effortlessly he used large cue cards that contained his dialogue. He was a total professional and a master of timing. A small group of musicians provided exceptional musical accompaniment for his featured singers and dancers. There were many laughs as he made everyone in the audience feel that they were a part of the act. He instilled a strong patriotic message of appreciation for our military service. The show concluded with a rendition of his theme song: “Thanks for the memories” replete with revised lyrics that were adapted for each base on the tour. He was great; what a showman!

The next morning members of his troupe came to the alert facility, referred to by everyone as the “Mole Hole”, and had breakfast with the flight crews. There was a member of his cast at every table in the dining room. Jerry Colonna sat at my table.

Jerry Colonna had been a side kick of Bob Hope since the early 1940’s. He was an accomplished musician as well as being a zany comedian. He had a piercing raucous voice and sang novelty songs that feature loud and sustained musical notes. His banter with Hope was filled with clever word groupings and quips with double meanings. He had big bulging eyes and a prominent mustache below his large nose. He was the essence of vaudeville and early radio.

But, that was Colonna’s stage image. The man who sat with us at breakfast was a quiet and thoughtful man with a soft voice and a peaceful demeanor. We spoke about the entertainment business and he inquired about our backgrounds and what we were doing in the Air Force. At one point a member of my crew asked him if his mustache was real. Without hesitation he replied: “No, it’s a fake. This one is real!” … as he pulled a large black mustache out of his blue blazer pocket.

I watched Bob Hope as he made his way out of the Mole Hole to the waiting airplane that would take him to his next show at Navy Keflavik in Iceland. As his entourage 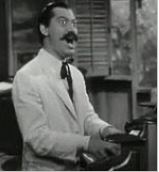 walked down the corridor he passed the game room where several crew members were shooting pool. One of the players called out a challenge for him to shoot a game of pool. Hope stopped dead in his tracks, and quickly approached the pool table. Handing his trademark golf club to someone, he took a pool cue and ordered: “Rack ‘em up!” He made a thunderous break, and without stopping he quickly cleaned the table of balls without missing a shot. When finished he handed back the cue and said: “See you Guys!”, tipped his hat and marched off toward the flight line. What a performance.

Bob Hope will always be in the hearts of the legions of service men and women he entertained during his 57 USO tours. To watch him in action and observe the impact he had on the audience was sometime to behold. A great entertainer … a great patriot! A great American!

Today, the actor Gary Sinise does a good job entertaining our troops with his Lieutenant Dan Band. Unfortunately, other than Gary Sinise, Hollywood and the entertainment industry have mostly been “missing in action” for the last thirty years. It’s a sad commentary!