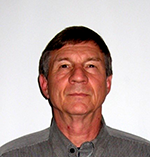 Captain Strempack retired from the New Jersey State Police after serving for 30 years in various capacities that included: general duty, administrative, management, investigation, and specialized services. Upon retiring he was a Chief of the Logistics Bureau.

Ted is past president of The Thomas B. McGuire Memorial Foundation, a nonprofit organization serving the military community that strives be a liaison between community volunteers, merchants, educational institutions. It raises funds to provide scholarships to the children of military personnel assigned to the Joint Base.

He worked on several of the foundation’s projects include The impressive Maj. T. B. McGuire P38 Memorial at the circle near the base entrance. Ted helped plan and fund the base flagpole memorial adjacent to the P38 memorial. He was a member of the team that restored Ultimate Weapon statue on Fort Dix that celebrates the accomplishments of the army infantryman.

During his tenure as president he directed activities that resulted in the construction of Starlifter Memorial Park with a C-141 as its focal attraction. The McGuire Foundation was instrumental in the creation of AFHHM and has remained a co-sponsor of the Joint Base Memorial Day remembrance: “Parade of Wreaths”.

Ted is the Chairman of the AFHHM Nominations Committee.