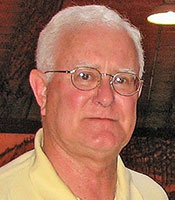 Matt served in the US Navy from 1952 to 1959. He started his service in the Naval Reserves and reenlisted in the regular Navy to pursue a career in Naval Aviation. After 18 months of Electronic Technician raining he was stationed at Patuxent River Naval Air Station and assigned to the Electronics Test Unit where he worked with Navy contractors testing and evaluating new avionics systems.

He transferred to VR-24, a transport squadron in Port Lyautey, French Morocco, where he served as Radio Operator and managed the Avionics shop. The primary mission of VR-24 was to service the U.S. Navy 6th Fleet in the Mediterranean, and when called upon, U.S. Naval Forces operating in other parts of the world. VR-24 and its Detachments delivered freight, mail, and personnel to U.S., NATO, and friendly foreign bases, ports of call, and via Carrier-On-deck-Delivery, to U.S. Navy ships at sea.

After being discharged from the Navy, Matt joined RCA as an Engineer working in the Government Services Division. He later transitioned to the RCA Computer Division as a Product manager.

He left RCA to join GTE Information Systems as a Data Communication Product Manager, responsible for all network related products.

He was then recruited by Digital Equipment Corp. as a Network Consultant. He was promoted to National Account Manager in the Process Control Group. As a result of this promotion Matt was nominated by senior management to attend the Harvard Business School’s Center for Executive Development. He studied core business functions and how they interrelate to develop an integrated approach to management. He worked effectively to build and lead global and cross-functional teams.

Matt is involved in the Knights of Columbus, St. Mary of the Lakes Church, in Medford, NJ where he also serves as an Usher in that parish.